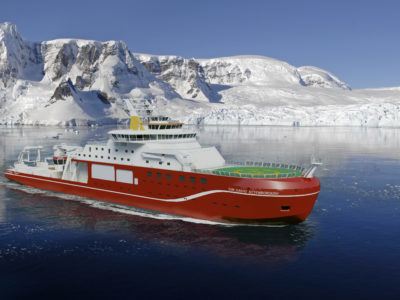 An Investment in Hope

I was honoured to be invited on Saturday to the launch of the British Antarctic Survey’s Sir David Attenborough. Although for me this meant a 14-hour return drive, it was worth it. The launch was a historic milestone and a significant move towards a safer world. Quite apart from that, the launch itself was quite spectacular.

I’d been loosely associated with this and several other major British Antarctic Survey (BAS) programmes, facilitating annual two-day workshops with the UK’s National Environment Research Council and BAS over the last four years. What has emerged for me is a growing admiration for the people involved and their mission. Working in the Antarctic is as near as you can get to the extremes of space travel without leaving the planet.

As the real Sir David said in his speech, science has shown us how interconnected we are with polar regions. What happens there affects our lives here and vice versa. It was British scientists who first monitored the thinning of the ozone layer in the Antarctic as long ago as 1944.

This new £200 million state-of-the-art vessel will be able to support cutting-edge science over the next 50 years. It will inform governments with accurate longitudinal studies about trends in global environmental systems.

Where is the hope? Well, we manage what we measure. There is hope for this planet. We can see how what we do in Birkenhead or Boston, Buenos Aires or Beijing effects glaciers and ice flows, marine life and oceanic pollution. And then we can act on that information.

Also, as the Bishop of Birkenhead said at the launch, this will inspire a generation of children to engage with science and engineering.

More than that, the culture I see developing with my client organisations gives me hope for leadership in these fields.

£200 million seems a lot as a UK taxpayer. However, it is an investment in hope, which is priceless.

Get more information on Resilient Hope

It's time to rediscover the power of resilient hope. Very little of the standard change management literature addresses this. If thought of at all, 'hope" is usually regarded as a weak emotion, not worthy of building upon.

My clients tell me that they have found this material very helpful, not only for those they are leading through a change, but also for themselves.

"I've identified lots of areas of application for myself!"
An IT project manager.

Subscribe and over the next few days I will send you:

Success! Now check your email to confirm your subscription. You will receive further information on resilient change over the next few days.

Please log in again. The login page will open in a new tab. After logging in you can close it and return to this page.